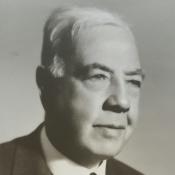 The son of George England and Bessie Goodland May was born on May 22, 1875, in Teignmouth, Devonshire, England. His preliminary education was at Teignmouth Grammar School and private tutoring (1882-89) and Blundell's School in England from September 1889 to December 1891, when he graduated.

On February 15, 1892 he became an articled clerk with Thomas Andrew of Exeter, England to obtain the experience necessary to sit for the examinations leading to a CA. He was certified as a CA in 1897; placing first in both the intermediate and final examinations. Upon completing his "articles," he joined Price Waterhouse & Co. in London in early 1897. He left the London office later that year to represent Price Waterhouse & Co. (then Jones, Caesar & Co.) in the United States office. He became a partner in 1902, and a senior partner in 1911, the position he held at retirement in 1940. He became an American citizen in 1909.

He was active in the AICPA serving as vice president (1917-18), member of the board of examiners (1916-19), and vice president of its foundation (1923-24). He served on many of its committees including chairman of the Special Committees on Administration of Endowment (1917-30), Cooperation with Stock Exchanges (1930-35), and Development of Accounting Principles (1933-36). He also served as chairman of the Committee on Terminology (1939-45) and vice chairman of the Committee on Accounting Procedure (1937-45). He was a member of the study group created in 1947 on business income jointly sponsored by the AICPA and the Rockefeller Foundation. He helped draft the study group's published report Changing Concepts of Business Income in 1952.

His leadership in a joint endeavor between the AICPA and the New York Stock Exchange produced the publication Audits of Corporate Accounts (1934), which discussed a recommended form of auditor's reports for companies and accounting principles and thus provided the basis for the Exchange requiring listed companies to have annual independent audits. The report was also instrumental in persuading the newly created SEC that the accounting profession should be the authority for accounting principles, rather than the federal government. In 1944 he received the AICPA's Gold Medal Award. In his name, an endowed chair of financial accounting was established at Columbia University following his death.

During World War I he was an official of the United States Treasury Department and the War Trade Board. Frequently thereafter he served as an advisor to the Treasury and other government agencies and an expert witness before many committees of the U. S. Senate. Other public services include president (1926-27) and chairman of the Board (1928-29) of the National Bureau of Economic Research; vice president, American Economic Association (1930); and director, American Statistical Association (1937-40). He was also director of the Council on Foreign Relations and chairman of an advisory committee for the Social Science Research Council.

He wrote an estimated 106 articles for professional journals (54 appearing in The Journal of Accountancy) and he authored Financial Accounting - A Distillation of Experience (1943). He presented lectures at a number of universities including Columbia, Northwestern, Stanford, and Yale. During the academic year 1936-37 he served as the first Dickinson Lecturer at Harvard.

He married Edith Mary Slocome on January 1, 1902; they had three children. His hobbies included the study of economic and legal theory and history, linguistics, and the collection of old English silver. He died May 25, 1961 at the age of 86.