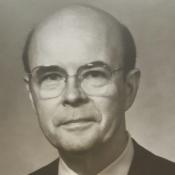 This national and internationally respected leader of the accounting profession was born in 1935 in Cleveland, Ohio. He attend Cleveland public schools where he studied French from the second through the tenth grades. He began his career at The Ohio State University in the arts and sciences college but transferred to business in his second year. His interest in accounting was stimulated and encouraged by the excellent teaching and advice of his introductory accounting professor and mentor, James McCoy, who recommended him for a General Electric scholarship and arranged for him to work part-time at a local public accounting firm. He also found time to serve as president of his Beta Alpha Psi chapter and pitcher-manager of his dormitory's baseball team. During his senior year, he obtained an internship with Ernst & Ernst in Cleveland. Upon graduation with honors in 1957, he decided to forego an opportunity to attend law school and joined E&E on a full-time basis. Former E&E Chairman and Hall of Fame Member Richard Baker recalls, "I did a lot of recruiting for the firm in those days and the only person who had a straight-A record was this young man from Cleveland."

In 1966, at the age of 31, he was promoted to partner becoming the youngest person in firm history to be admitted to the partnership. In 1968, he was named North Central Regional Director of Accounting and Auditing and, four years later, he became National Director of Accounting and Auditing and SEC Practice and chair of the firm's Technical Committee. During this period of rapid change and development in accounting principles, he spearheaded an extensive and influential series of publications on accounting, auditing and related topics. During one twelve-month period in the early 1970's, his department issued 100 publications. In 1976, he became Deputy Chairman of E&E and, upon the retirement of Dick Baker in the following year, he became Chairman and Chief Executive Officer, a position he held from 1977 through 1994.

As Chairman and CEO, he set about preparing to meet the challenges of the coming 1980s­an emerging global marketplace, new industry focuses, and increasing competition in financial services. He recalls, "We agreed that there were three things we had to do to meet these challenges­establish a much stronger presence and size capability in New York, create an international firm, and strengthen our marketing efforts." In 1978, E&E merged with the New York firm of S. D. Leidesdorf & Co. and, in 1979, with the English firm of Whinney Murray & Co., changing the new partnership's name to Ernst & Whinney. In 1989, Ernst & Whinney merged with Arthur Young & Co. to form Ernst & Young. During his 17 years at the helm, he led a national firm with particular strength in the Midwestern United States to become one of the world's dominant professional services firms. He also led his firm out of the difficult and litigious period following the savings and loan industry collapse while maintaining the firm's commitment to quality, client service and professional integrity.

His dedication to the betterment of the accounting profession is reflected in his distinguished record of professional service. Following service to the American Institute of Certified Public Accountants as a member of its board of directors and council, chairman of its SEC practice section, and chairman of its Committee on Relations with the SEC, he was named Chairman of the Board of the AICPA for its 1984-85 year. As Chairman, he was instrumental in the creation and appointment of the Treadway Commission that undertook to improve financial management and deter financial fraud. As Chairman, he also expressed his long-held concerns about accounting disclosure overload and advocated the need for financial reporting and auditing that accommodates changing and diverse needs for financial information. His extensive record of professional service also includes membership on the Board of Trustees of the Financial Accounting Foundation, the Board of Governors of the American Stock Exchange, the Board of Governors of the National Association of Securities Dealers, and numerous committees of the U. S. Securities and Exchange Commission including its Advisory Committee on Corporate Disclosure.

His personal dedication to service on behalf of academe and the community at large is reflected in his extensive record of volunteer leadership in organizations through membership on their boards and committees. A long-time supporter of higher education, he has served on the advisory councils and boards of many colleges and universities including his alma mater, The Ohio State University, the University of Pennsylvania's Wharton School and Center for Study of the Service Sector, the University of Chicago's Graduate School of Business, and Ursuline College. He currently serves as vice-chair of Board of Directors of The Ohio State University Foundation. His many public service activities include Councilman for the City of Lynhurst, Ohio; Chairman of the Board of Trustees of Leadership Cleveland; Chairman of the Fishman-Davidson Centre for Study of the Service Sector; and membership on the boards of the Business Council of New York State, the Business Council for the United Nations, the New York State Public Policy Institute, and the Council on Foreign Affairs. He also serves as a managing director, executive committee member, and secretary-treasurer of the Metropolitan Opera Association.

His many honors and awards include the Gold Medal of the American Institute of Certified Public Accountants and countless awards from the colleges, universities, and professional and service organizations to which he has given so generously of his time and energy over the years.

Currently, he is Chairman of Legg Mason Merchant Banking, Inc., a private equity fund, and serves on seven New York Stock Exchange company boards of directors. In addition to a deep interest in the opera, he enjoys hunting, golfing, reading, and supporting his wife's interest in American and European antiques. He lives with his wife, Anne, in New York City and Connecticut; they have three sons, David, Philip and Matthew. He is the 63rd member of the Accounting Hall of Fame, Ray John Groves.