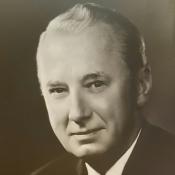 The son of William and Mary Dalton Queenan was born on January 11, 1906, in Aurora, Illinois. He attended East Aurora High School in Aurora, Illinois, graduating in 1923. He was graduated from the University of Illinois in 1927. After graduation, he joined Haskins & Sells, becoming manager in 1936, partner in 1939, and managing partner in 1956, the position he held at retirement in 1970. He was certified as a CPA in 1931 (Illinois), receiving the gold medal of the Illinois Society of CPAs for the highest grade on the examination. He is also licensed as a CPA in twenty-seven other states.

He was active in professional organizations where his distinctive characteristics of leadership, exceptional capacity, and purposeful persistence flourished; he served as president (1961-62), and vice president (1958-59) of the AICPA. He was a member of the AICPA Council (1957-62; since ex-officio) and he served on many of its committees, including chairman of the Committees on Relations with the Bar (1954-61), and Education (1943-46). From 1957 to 1961, he was co-chairman of the National Conference of Lawyers and CPAs. Perhaps more than any other accountant, he helped to establish the credibility of the public accounting profession with the American Bar. He was chiefly responsible for resolving a struggle which had gone on for several decades over the scope of CPA tax practice. He served the Illinois Society of CPAs as a member of the Board of Directors and the Special Board of Examiners in Accountancy (1947-50). Active in the New Jersey Society of CPAs, he served on many committees, and he was twice treasurer. He also served the New York State Society of CPAs as vice president (1960-61); member, Board of Directors (1958-61); and chairman of many of its committees. He has served on all three of the major rule-making bodies of the accounting profession: member, CAP (1949-54); member, APB (1963-68); and vice chairman, FASB (1973-74). In addition to membership in the above professional accounting organizations he holds membership in the AAA, the Connecticut, Louisiana, and Ohio Societies of CPAs, and the Pennsylvania Institute of CPAs. A consulting editor of the CPA Handbook published by the AICPA in 1953, he has written numerous professional articles. In 1968 he received the AICPA's Gold Medal Award, and in 1970 he was the recipient of the Illini Achievement Award of the University of Illinois. He had been a member of the University of Illinois chapter of Beta Alpha Psi starting in 1926.

He had been active in government, civic, and community services. He was a member of President Nixon's Price Commission (1971-73), and the U. S. Council of the International Chamber of Commerce. In his community of Greenwich, Connecticut, he served as chairman of the 1972 Community Chest campaign, and as a member of the Board of Estimate and Taxation, the town government's budgetary unit. In 1975 he became chairman of the Greenwich Commission on Aging.

He married Alice Thomas on June 15, 1927; they had four children. In his leisure time he enjoyed opera, golf, and collecting clocks. John William Queenan died in April 1995 at age 89.